Year of the Panda 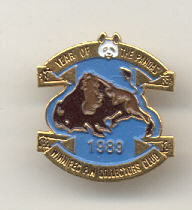 The pin for 1989 features the Bison, a well-known symbol of Manitoba. As well, the pin shows a panda bear.

It was during 1989 that Winnipeg’s Assinboine Park Zoo played host to Rong Rong and Cheng Cheng, giant panda bears.

The internationally recognized Pandas in Person project was developed and presented by the Zoological Society and the Assiniboine Park Zoo. Operational though the summer of 1989, the Society helped to raise $3,000,000 in support of the overall program – including construction of a new facility to house the Pandas. The Panda project enabled the Society to raise funding for directional signs within the zoo. These are the first directional signs within the zoo.

To learn more about the Giant Panda Bears click here.