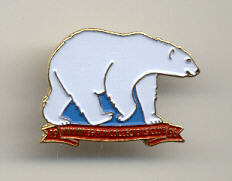 With permission from noted photographer and author, Robert Taylor, we took his picture of a polar bear actually crossing blue ice near Churchill, Manitoba for the design of our 1996 pin. The photo of this bear is featured in Mr. Taylor’s book “Edge of the Arctic – Churchill and the Hudson Bay Region”.

Polar bears (Ursus maritimus) are circumpolar in distribution, inhabiting the majority of Arctic seas and coastlines. They range across territory owned by Canada, the United States, Russia, Sweden, Finland, Norway and Denmark.

In Canada, polar bears can be found from Labrador to the Alaskan border, and from James Bay to northern Ellesmere Island. During the summer, bears in the Hudson and James Bay areas spend several months inhabiting terrestrial landscapes, sometimes travelling as much as 150 km (90 miles) inland.

An estimated 20,000 to 40,000 polar bears remain in the wild. The United States Alaskan population is thought to number around 2,000, while Canada’s polar bear population is estimated at between 13,000 and 15,000 individuals.