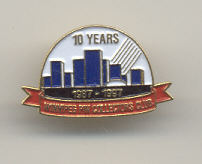 The Winnipeg Pin Collectors Club celebrated its 10th anniversary as a club with this pin depicting a Winnipeg skyline.

The City of Winnipeg is located at the junction of the Red and Assiniboine Rivers, almost at the geographic centre of North America. With an ethnically diverse population, Winnipeg is characterized by slow but steady growth. It is the eighth largest city in Canada and dominates the Manitoba economy.