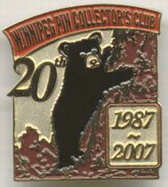 In the middle of winter, bear cubs are born as their mother remains sluggish and inactive in her long winter’s sleep. In their snow-covered dens, female bears give birth to between one and four tiny immature cubs. Newly born cubs have little hair on their bodies and weigh about half a kilogram. The tiny cubs snuggle up against their mother’s warm body and periodically suckle her fat-rich milk.

The cub’s eyes won’t open for another 3 weeks. When they do, the only world they will see and experience for the next few months is the world inside their den. By mid-April to early May, the mother bear and cubs will venture outside their den for the first time. The mother bear is still very sluggish at this time while her three to four kilogram cubs come out of the den like wound up springs suddenly uncoiled. They run and jump on each other, and will sometimes use snowy avalanche chutes as slides. At this stage, the cubs still depend on their mother’s milk for nourishment, which places major energetic demands on her. The bear family may stay near their winter den for the next few weeks and will sometimes sleep inside.

Once they leave the den site, the cubs are seldom more than a few hundred metres from their mother. Even though female bears are very focused mothers, most cubs don’t survive to become adults. A number of factors affect a cubs ability to survive its first few years of life. Other bears, in particular adult males, pose a serious threat to cub survival. Mother bears will take their cubs to remote areas or places where the habitat is less productive and less likely to attract other bears. In some cases, mother bears will even take refuge in areas of high human activity that are often avoided by large adult males. Unfortunately, this can put the bear family at risk of conflict with humans.

After about 1½ to 4½ years, the surviving cubs of a litter will separate from their mother. Young female bears won’t be ready to reproduce until they are six to seven years of age. Once they are ready, they will only reproduce on average every four years.