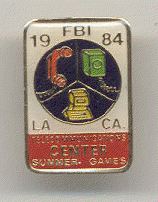 Well guys, sorry for the delay, but I finally came cross the few remaining 1984 Olympics, KGB Pin, and the photo is enclosed. These pins were made by HAL Manufacturing in San Pedro, CA. Again I can only account for approximately 80 of the 250 made (I have approximately 20 left of the 100 that was given me). I am sure the rest were given to the guys who were on the Los Angeles, Foreign Counter Intelligence Russian Squad at the time. These pins were cloisonne with no clear enamel coating. Please read the previous article for further information. Ron F.

Ron, Came across your web site, and just wanted to give you some history on the FBI Telecommunications Pin. Jim K. and myself were the designers of the pin during the summer games. At the time, there was only one FBI pin for the Olympics (blue and red with shield). There was also a second version of the same design with a white bottom area. I believe that this pin was designed by “Nick B.”, who was on the Terrorism Task Force at the time. I decided to make a pin for the Telecommunications Unit, but determined that I needed to get authorization (Bureau approval) according to the MAOP (manual of administrative & operational procedures), but it was very vague regarding whether or not I had to get HQ (Washington) approval or just Office approval. We decided that all we needed was some sort of executive approval at any level. We eventually got written approval from the Assistant Special Agent in Charge at the time “Bryce C.”, which wasn’t to easy to get, because the prices for the first FBI Olympic pins were going crazy, and there was some concern as to whether or not employees of the FBI should be making money from their sale, just because of their employment. We advised ASAC “Bryce C”, that we were essentially making them for trading purposes, and believed that the demand for a “specialized” Olympic pin (telecommunications pin) would not be in strong demand like the general FBI pin anyway. Boy, were we wrong! We started getting calls from other countries for the TC pin, along with offers of 50 to 100 pins in trade! We only had 250 pieces made by Hal Manufacturing in San Pedro, along with some Prototypes (5).

Afterwards, due to the demand for the original FBI pin and the TC pin, a second run of FBI pins were made in the shape of a shield, with white background, red border, and the Bureau Seal in the center and offered to FBI employees for $5.00 (limit 20 per employee) a piece. The profits from these sales went to the FBI Recreation Association. There were two other color variations for this design, with one consisting of a light blue background, and one with a dark blue background with white seal. There were numerous other “joint” pins that came thereafter, such as the Terrorism Task force pin, Surveillance Task Force, etc., but to my knowledge, the above were the only pins solely made for the Los Angeles FBI Field Office. Also, almost six months after the Olympics were over, a “Sam the Eagle” pin holding the FBI seal “popped-up”, with different color variations, but I don’t know if this was even made by an employee of the FBI or not, as no one in the office admitted to making it. As a footnote, the Russian FCI (Foreign counter-intelligence squad) also made a KGB pin during the same time. There were 250 of those made, but at the time only about 50 were released. The reason that only a few were released, was that shortly thereafter, the Los Angeles FBI Office arrested R.W. Miller (who was on the same squad) for espionage, and the squad felt it would not be appropriate to release the pin. I was offered approximately 100 of the pins from one of the designers in the office, who believed that they he would never be able to do anything with them because of the R.W. situation. Within the past year or so, I sold many of the KGB pins on Ebay. To my knowledge, the 1984 FBI pins were the first ever issued by an FBI field division for the Olympics. Hope this adds to your history of the 1984 Olympic FBI pins.