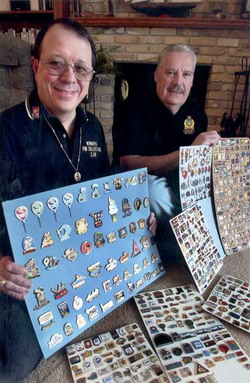 Who better to ask about the 2003-04 Home Grown Hockey Heroes Pin Collection than Ron Boily?

As president and one of five founding members of the Winnipeg Pin Collectors Club, the North Kildonan resident has been gathering pins for 18 years now, so he should know a little something about the hobby.

Owning over 15,000 pins qualifies him as an expert.

“That’s all we’re talking about these days,” the 56-year old retired photographer said about the Winnipeg Free Press hockey pins, which are available now at participating 7-Eleven, Safeway, Canadian Tire, and Shell locations.

“It’s a big thing, especially the way it’s being done. Some of our members are excited, and I’m sure hockey fans are thrilled about the whole package.”

The Winnipeg Pin Collectors Club has been up and running since 1987 and it has seen its membership grow from a small cluster of local collectors into a global group. Currently with 65 members, the club’s standing now stretches across Canada and the United States, and even has people in Belgium and Denmark.

“We started the club because we were tired of trading with each other,” Boily said.

The local members meet every second Tuesday a month at the Vince Leah Community Centre to talk and swap pins.

Boily said the pin industry is similar to fluctuations in the stock market, where outside circumstances often dictate the fervor in which pins are traded.

“What happens is that when there are major events, the club really seems to be active,” he said. “When the Calgary Olympics were taking place in 1988, our membership was at its highest, and we’ve seen spikes within the club ever since.”

Those “spikes” Boily refers to include the 1999 Pan-Am Games, the 2003 Western Canada Summer Games, and the 2003 World Curling Championships – events which brought different people and their different pins to this province.

The biggest area of pin collecting, especially with beginners, is sport. That makes sense, given its wide range and ever-increasing popularity, but novice collectors be warned: if you grab every pin that comes your way, you might not enjoy the hobby as much as you had hoped.

Of the 5,000 pins Kolbauer has in his portfolio, most of them are media (television and radio stations, and other forms of communication). Boily lists Disney, Hard Rock Café, CFL and FBI pins among his fields of specificity.

Hockey is very popular with the club’s members, and Boily notes those members who collect pins of the game usually specify even more – to either a team or an international event (like the Olympics or an IIHF-sanctioned tournament).

“People who collect hockey pins will tend to collect their favourite team or their favourite player,” Boily said. “But there are a few who want everything to do with the sport, and I’m sure the Free Press pins will be a part of their collection.”