Prickly Treasures Have Tales to Tell 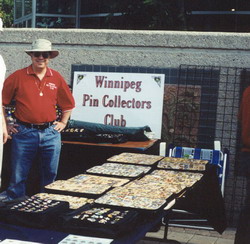 Wayne Park’s fascination with collector pins began when he was a teenager. He was enthralled by the mystery each pin held. To Park, now retired, each of the several thousand pins he owns has its own story to tell. “Of course, there was not as many to choose from back then, but I’ve always had an interest in pins,” said Park. Park is president of the Calgary International Pin Club, an organization of about 60 collectors that gathers once a month to trade pins at West Hillhurst Community Centre. The club has members from across North America and several in Europe. Many members from outside Calgary are drawn to the club by their interest in Olympic or Stamped memorabilia. Collectors tend to focus on specific theme or type of pin. Some of the more popular choices for Calgarians are Olympic pins, other sport-related pins and pins from foreign countries, Park says.

Local collector, Ted Donald, has about 9,000 pins in his collection, 3,700 of which are doubles or unwanted pins he uses for trades. He collects mostly Calgary Stampede and Olympic pins, but does not limit himself – he has accumulated a wide variety of pins in his dealings. He once had to purchase a collection of 600 pins to get three he wanted “Some people just won’t sell them individually,” he said. Pins do not need to have esthetic appeal to be sough. Often, the unusual and ugly ones can be in high demand. Donald recently acquired a 1928 Stampede pin that is a prize addition to his collection. “It was pretty much plain, bordering on ugly,” he said, “but when you’re trying to collect a full set, you need even the ugly ones.” It can be difficult to place a price on pins because each has a different value for different collectors, he said. Donald said most serious pin collectors aren’t in it for the money. In fact, several collectors warned that beginning traders should be cautious when dealing with those who “make a business out of it.”

Ron Boily, president of the Winnipeg Pin Collectors Club, is another pin fanatic. The retired 56-year old photographer, who has been collecting since the 1980’s, has at least 15,000 pins displayed in his home and knows what’s hot and what’s not. Sport is always hot. “Pin fever really started at the Los Angeles Olympics,” says Boily. “Whenever there is a major sporting event, thousands of people pick up pins.

Our membership really spiked during the Calgary Olympics (1988) and you should have seen it when Winnipeg hosted the World Curling Championships last year.

“Collectors came from all over the world to watch the curling and trade pins. There is such a huge pin following for curling. “Certainly, you can expect the same to happen when the Winter Olympics come to Vancouver.”

Adam Livingstone, a collectibles expert with Waddington’s Auctioneers and Appraisers of Toronto, said pins are not very valuable compared with some other kids of collectibles. “It’s more of a personal value than monetary,” he said. However, he noted military pins, historical pins and early brand name pins, such as Coca-Cola, can be valuable to certain collectors.

In 1988, Coca Cola established the first Coca-Cola Official Pin Trading Centre at the Olympic Winter Games in Calgary. Approximately 16,000 people visited the centre each day. It was so successful, the company has set up in trading centres at every Olympic Games since. Donald said the pin trade in Calgary has slowed considerably since the heady days of 1988. “Things were red hot during the Olympics,” said Donald. It was really the heyday for pin trading in Calgary. “Now, you take an Olympic pin that costs $200 to $300 at the time, and you’re lucky to get $5 for it.” The Internet has played a large part in bringing many collectors together, but Park said it is much more fun to attend trade shows where one can meet other collectors and view their collections. “A lot of people will pick up a pin here and there during their travels,” said Park. “Whenever I plan on going somewhere, I usually look out for any shows that may be going on. You never know what you might find.”