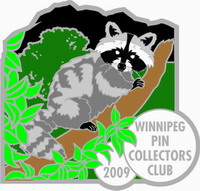 Raccoons are extremely adaptable, being found in many kinds of habitats and easily living near humans. They require ready access to water. Raccoons prefer to live in moist woodland areas. However, they can also be found in farmlands, suburban, and urban areas. Raccoons prefer to build dens in trees, but may also use woodchuck burrows, caves, mines, deserted buildings, barns, garages, rain sewers, or houses. Raccoons can live in a wide variety of habitats from warm, tropical areas to cold grasslands.

The most distinguishable characteristics of the raccoon are its black mask across the eyes and bushy tail with anywhere from four to ten black rings. The forepaws resemble slender human hands and make the raccoon unusually dexterous. Both their forepaws and hind paws have five toes. Coloration varies with habitat, but tends to range from grey to reddish brown to buff. Raccoons are stocky in build and generally weigh from six to seven kilograms. Weight varies with habitat and region, though, and can range from 1.8 to 10.4 kg. Raccoons are capable of achieving body masses made up of 50% body fat, but it is mostly raccoons in the northern parts of the range that become this fat. Males are usually heavier than females by 10 to 30%. Body length ranges from 603 to 950 mm. Their tails comprise about 42% to 52% of their length, from 192 to 405 mm.

Raccoons generally have one litter per year. Litter sizes range from 3 to 7, but are typically 4. The gestation period is 63 to 65 days. Sexual maturity often occurs in females before they are one year old, and in males at two years. Mating season is from February through June, with most mating in March. Northern populations tend to breed earlier than southern populations. Young are born blind and helpless in a tree den, their eyes open at 18 to 24 days of age, and they are weaned after 70 days. By 20 weeks old the young regularly forage with their mother at night and continue to stay in the den with her. The young remain with their mother through their first winter, becoming independent early the following spring. Mothers and young often den nearby even after they have reached maturity.