OK, here’s what I want you to do: Take a couple of medium-rare steaks and strap them to your body. Now jump into a large tank containing at least a dozen extremely hungry sharks. 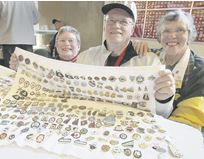 Maxine Forbes, left, her husband Keith and Halga Phillips are among the pin traders attending the 2008 Tim Hortons Brier.

Congratulations! Now you know how I felt Tuesday when I wandered over to the pin-trading tables at the 2008 Tim Hortons Brier with a couple of Free Press curling pins clutched in my hot little hands.

(Editor’s Note: Doug is exaggerating here for comical effect. We are sure the pin collectors are very nice and would never eat anyone.) The point is curling-pin collectors really like pins. No. Scratch that. Curling-pin collectors LIKE curling, but they really really LOVE pins, especially pins they do not already have in their collections. So there I was in the crowded concourse of the MTS Centre with the aforementioned two pins, which I planned to exchange for insightful interviews with collectors. It is difficult, using mere words, to convey the level of excitement my two little pins generated among the dozen or so collectors, but I will try: They were very excited! The first person I gave a pin was Keith “The Pin Man” Forbes, a soft-spoken Manitoba farmer who, at 68, is arguably the largest collector of curling pins in Canada. Keith not only agreed to tell me about his hobby, but he also gave me one of his personal pins, which features a likeness of his head and boasts “45 years collecting,” although he’s been doing it for more like 48 years. “There’s about 4,500 pins here,” Keith said, pointing to the giant display cases behind him, “I’ve got another 10,000 pins mounted at home.” He got the bug in 1960. Since then, he’s picked up pins at 19 Briers, 14 world championships, 17 Canadian women’s championships and three world junior championships. “We prefer not to sell pins,” Keith told me. “I just like to trade pin for pin. It’s mainly just to meet people. It’s like a family reunion when we come here. We just trade pins and B.S.” When they’re not trading pins, the collectors even find time to watch a little curling. “I maybe watch one game a day,” Keith said, “Most of my time is spent in front of the pin-trading tables.” I asked Keith whether anyone — perhaps a refugee from a Star Trek Convention — has ever been cruel enough to suggest there is something a little “nerdy” about this hobby. “I’ve been told I am (a nerd),” he said, laughing. “Maybe it’s true in a way. I just take it all in stride.” As we chatted, another pin collector, Halga Phillips (“It’s with an ‘A’ because there’s no Hell In Me!”) sidled over. Keith flashed his new Free Press curling pin. Halga’s eyes grew wide. “How in the heck did you get THAT?” demanded the 68-year-old Red Deer, Alta., resident, now attending her 29th Brier. Keith nodded in my direction. “Oh my!” the feisty, fast-talking Halga exclaimed, “I’d better start talking nice.” I rummaged in my pockets and handed over the second and last pin. “It’s a very cool pin,” Halga cooed. “It’s one of about 44 Brier sponsors pins. It’s one I didn’t have and it’s got a (fake) diamond in it. You’re a good sponsor. Not all the other ones have gems in them.” Important Safety Tip: If you find yourself at the Brier, do NOT jokingly suggest to Halga that there is anything even remotely “nerdy” about collecting curling pins. “We’re definitely not NERDS!” she snorted, “I do NOT like that word. I’m a (searching for the word) pin fanatic. No, not a fanatic. I’m a (searching again) pin ‘interester.’ If I didn’t have pins on, nobody would stop and talk with me and that’s trouble.” But has she ever been teased about her hobby? “Not that I know of,” Halga declared. “If they did, they wouldn’t get away with it.” For much of the day, there seemed to be as many reporters — everyone from rural radio stations to a Grand Forks TV crew — as traders visiting the pin tables. The traders agree their pins have more emotional than monetary value. But that doesn’t mean the trading doesn’t get a little heated on occasion. “We pretty near had to manhandle some guy in Regina,” Keith recalled. “He thought his pins were worth a lot more than the ones we had.” As word trickled out that I was an easy mark for new pins, other collectors popped by for a visit. Marjorie Joanis of Saskatoon noted her nephew works for the Free Press and he would definitely want me to get her a pin. “We’ll drop names to anyone we can,” she said. “EVERYONE wants to get EVERY pin.”

Eventually, they let me leave, but not before I promised to track down more pins for the other collectors. If I don’t deliver, I’m afraid they’ll be able to find me. I think they can smell fear.